I don’t know when I’m going to be active again. Right now, I can’t really think about it and I may need it later to distract myself but at this moment I might not respond to comments over the next few days. I have posts ready for the rest of this week so thankfully I haven’t had to worry about that… But I lost my dog today.

I’m so thankful for the fact that I had the day off yesterday because of the holiday and I was able to spend the entire day with him. He wasn’t feeling well this weekend so I was just looking after him, petting him a lot and I put his bed next to mine before I went to bed. I kept petting him a little bit while I was laying there and he’d nuzzle my hand. Then I fell asleep and when I woke up in the morning he was gone.

And now I have to figure out what to do with his stuff… I can’t even think about it. I just thought he was going to get better. He was 18 but until now there was nothing wrong. The Vet even said that he was healthy and it wouldn’t be surprising if he lived to be 26. 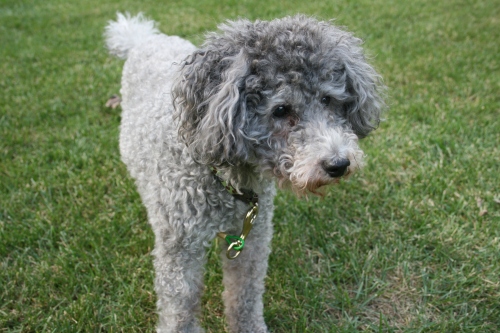 “Even the tiniest poodle is lionhearted, ready to do anything to defend home, master, and mistress.”

Today I lost my best friend, Piper. He was just shy of celebrating his 18th birthday. He was the sweetest little guy that you could ever meet.

He loved being held like a baby and would show his devotion to you by lovingly shoving his nose into everything – never licking.

Sometimes he would run around outside, but only on three legs even though all four worked perfectly fine. He even hopped like a little grey bunny.

His favourite stuffed animals were little grey dogs just like himself and he couldn’t pass up a good meatball treat.

I don’t know what I’m going to do without him.

15 thoughts on “Temporary Hiatus – My Loss”